The couple bought this fieldstone house in Laval, Quebec, in 2001—after 10 years of “looking.” Vicky and Marc-André have known each other since they were teenagers riding around together on Sundays to look at old buildings. Vicky, who is now a graphic artist, and her cabinetmaker husband, Marc-André, long dreamt of the day they would acquire an old stone house that needed them.

They fell in love with the 30′ x 28′ house, despite its dismal state of neglect and abandonment. It was built in 1840 by a farmer named Noel Nadon, and was locally known as the Nadon House. The couple announced their intentions to friends and relatives, who questioned whether they had gone mad. “My dear mother broke down in tears,” says Vicky. Unfazed, the two explained that they had a vision for the house, which would fulfill their passionate wish to rescue a heritage building. Budget-hampered modernizations by a succession of owners had stripped its soul. Vicky and Marc-André would work hard to restore it. 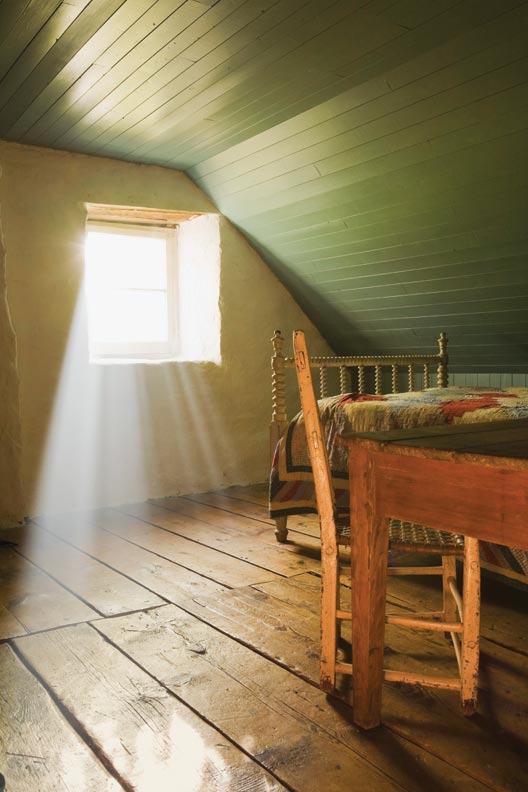 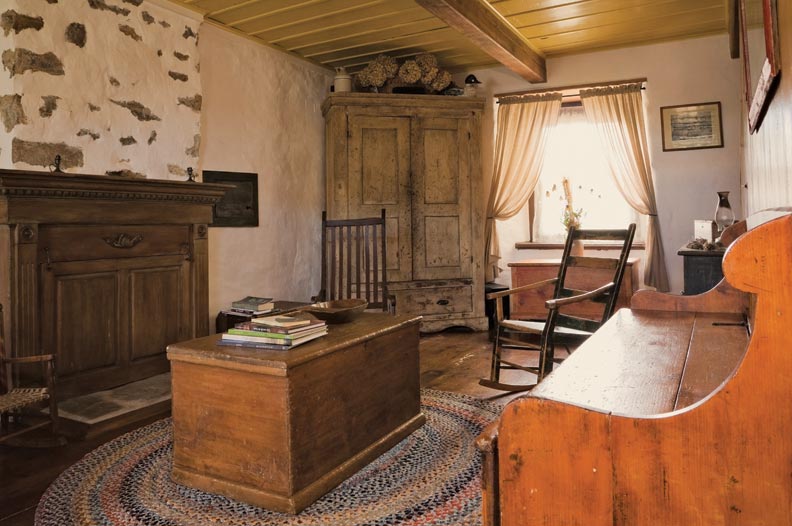 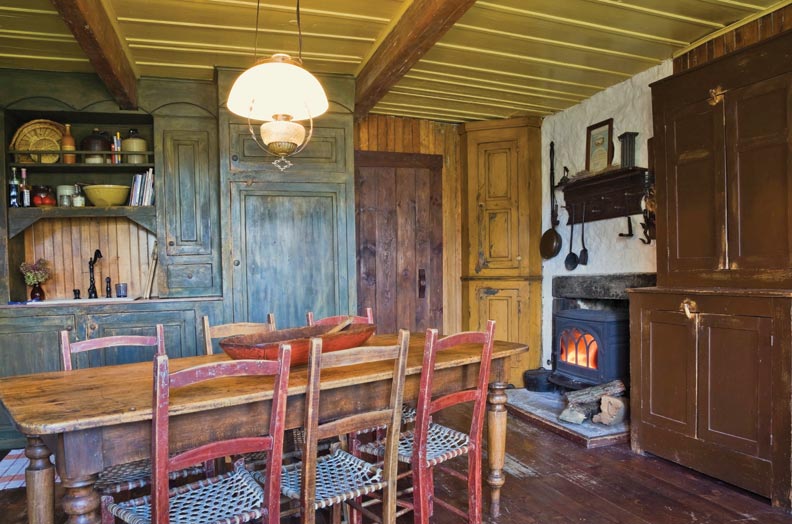 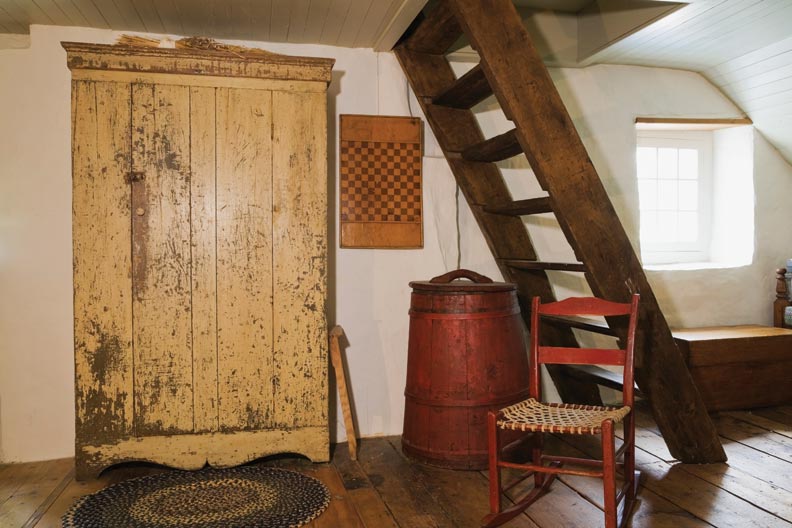 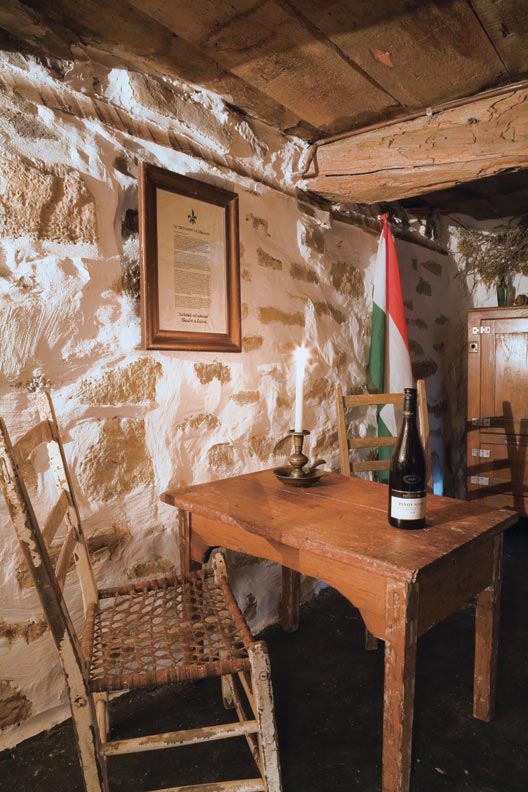 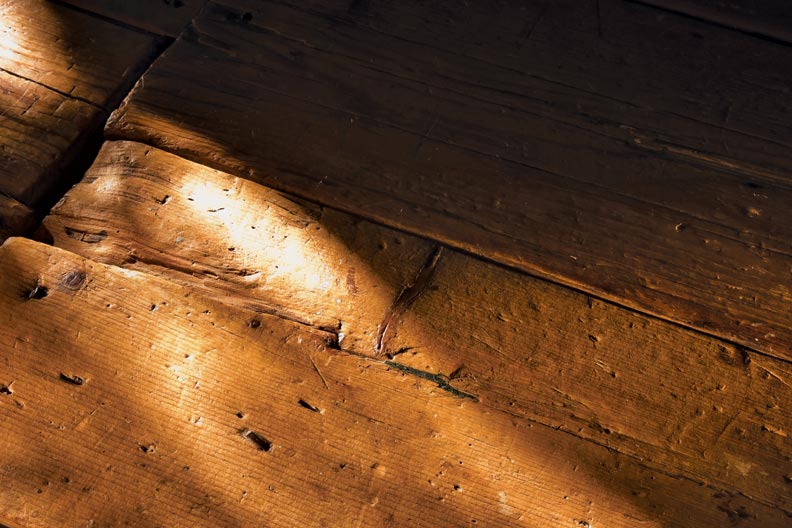 It would take nine years. The exterior fieldstone walls were hidden under a thick coat of cement, lending the façade a false-brick look. Asphalt roof shingles were blowing in the wind. Wood paneling laid over the fieldstone inside, and gypsum board used as partitions between rooms, would have to go. Floorboards were missing and sheets of Masonite concealed the original ceilings.

The first task for the family—they moved in with two children, a limited budget, and boundless energy—was demolition of the partition walls. They spent their first winter in an obstacle course of building materials heaped into a house with no insulation and plenty of cold drafts. Wearing wool slippers, mittens, and jackets inside, they relied on a positive attitude and a sense of humor in the early going. And they did their research.

Decisions for the restoration were derived from what they found in the archives and their study of traditional building. The red paint on the exterior was chosen based on their meticulous scraping in a doorway. The yellow ceiling and green cabinets in the kitchen were inspired by actual period paint colors.

They discovered that the house was built as a semi-detached residence; to honor that history and the house’s symmetry as built, they kept the original openings—two doors and two windows on the primary façade. (Though it is not a protected building, the house is classified by the city as a Heritage Building of Interest.) The detective work was sometimes entertaining. For example, they learned that half the house was inhabited by an elderly couple and the other half by their son, who would inherit on the condition that he provide his father with chickens, pigs, and a vegetable harvest every year.

The couple also delved into the history of ownership at the National Archives of Quebec in Montreal: The original landowners were two French merchants who received the concession from Louis XV. Vicky and Marc-André drove up to Old Quebec City where, at the Seminary of Quebec, they were able to see the original deed from 1768. Vicky calls it a deeply emotional experience. They established that the plot was once planted with crops; that generations of Nadons had occupied the house until 1896; that, by 1950, the house stood on a modest lot of 5,000 square feet after subdivision of the property.

After four years of work, the house was sound and insulated; electrical and plumbing systems conformed to modern codes. For the next five years, the couple would continue their renovations—including installation of a traditional sheet-metal roof—and begin to decorate and furnish the interior. They had a third child in 2006. Soon it would be time to light the woodstove and enjoy the relative lack of dust.

An architectural heritage association gave them an award for their work in 2010. But the two say that a bigger reward has come from the change in lifestyle they embraced in this house. Vicky says that they have adopted habits and values of another era. To some extent, they practice a simpler way of life than they used to.

Modern technology is welcomed in this house, but it is not a focus. Appliances are concealed to maintain the historical atmosphere. Electronic gadgets are put away in drawers and closets. Rooms are kept dim; there are only three fixed electrical lights in the house, and the family uses portable oil lamps or candles. Vicky says her three daughters are naturally learning about consumption and moderation. For her own part, Vicky has taken to sewing clothes by hand and on a treadle machine. She bakes bread and makes jam, grows an herb garden, and—if only the city bylaws would allow it—she’d like to keep some chickens, too.