When Mary Kennedy and Andy Lyle bought their 1913 Seattle bungalow in 1991, it was far from perfect. Much of the original trim had been removed, ceilings had been dropped using acoustic tile, and most of the windows had been ‘updated’ in aluminum. When a piece of upstairs ceiling unexpectedly caved in one day, the couple knew they needed to make some major changes, but they didn’t want to rush into anything—they preferred to live in the house for awhile and get to know it first.

It wasn’t until nearly a decade later, while attending a Historic Seattle lecture on “Remodeling versus Remuddling,” given by local architect Tim Andersen, that the restoration wheels began to click. They soon hired Tim to develop a master plan for their house, aiming to address three major areas—the dining room, master bedroom, and kitchen, which they planned to attack in stages. “Our goal was to stay in the house during any renovation work,” says Mary, so the projects were done in phases over many years. 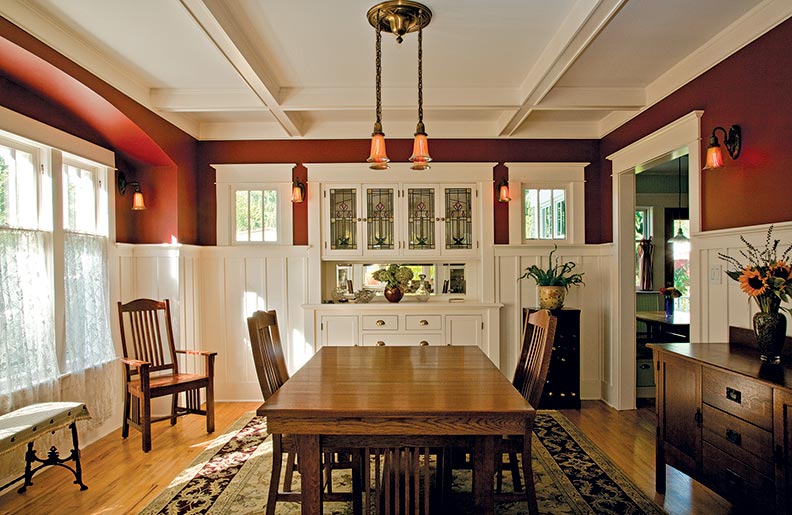 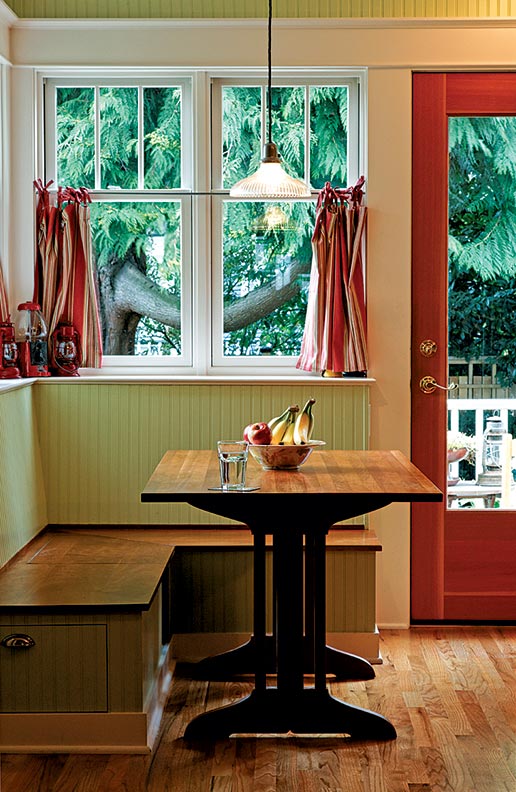 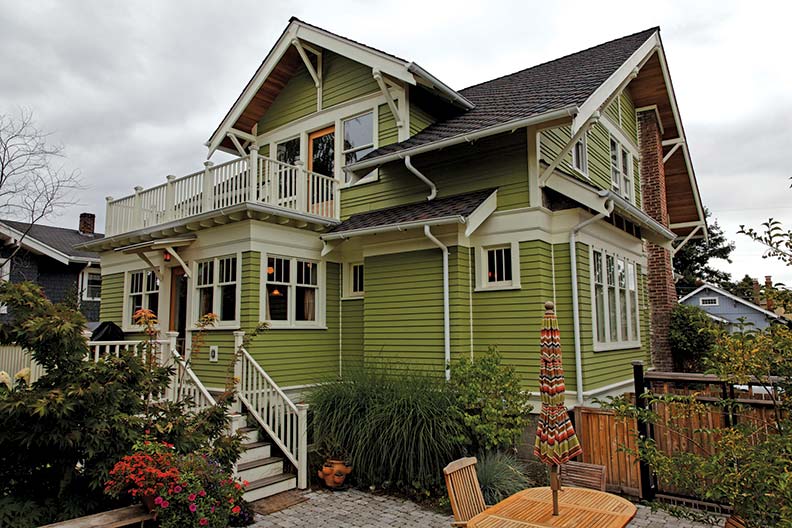 Turning Back the Clock

The dining room, the first restoration target, presented a number of challenges. Its once-prominent ceiling beams had been ruined when wires were threaded through them during an electrical update, the whole mess then covered by acoustic tiles. The room’s original woodwork was long gone—even the buffet was devoid of upper cabinet doors. Tim started by designing new accents based on remaining clues.

“Since windows were placed at what could have been plate-rail height, this became the datum,” he says. “We designed a plate rail with board-and-batten wainscot below.” While Tim couldn’t find evidence of an original colonnade, he felt there should be one. “The 9½’-wide opening into the living room was too wide,” he says. “Both rooms would be more usable if the corners were enlarged and furnished.”

The colonnade’s stained glass doors, and those on the original buffet, are new, created by local craftsman James McKeown, who has repaired original art glass installations around Seattle’s historic Capitol Hill neighborhood for years. His Arts & Crafts-lined floral design includes a subtle curve atop the buffet doors that replicates an era-appropriate arch Tim added over the room’s bay window. The bay’s aluminum windows were replaced with handcrafted wooden replacements—made with antique glass—to match two original windows flanking the buffet.

“We were so excited when the dining room was done,” says Andy. “The way it turned out gave us the courage to keep going with work on the rest of the house.”

The master bedroom was next. It had been partially demolished years earlier when Andy—inspired to turn a closet into a bathroom—took a hammer to the space while Mary was away on business. The project soon stalled, however, when the couple couldn’t agree on how to proceed. “We were sleeping in the guest room and basically using the master bedroom as a garage, because we couldn’t make any decisions,” says Mary—until Tim arrived on the scene.

“When couples have divergent views, I’ll ask them each to send me a list of top priorities,” says Tim. “The key to reconciling differences is to ask what’s best for the house—what will improve its livability and function—and move the conversation past personal preferences.”

In the case of the bedroom, that meant removing the ceiling and adding a ridge beam, tongue-and-groove paneling, and plenty of skylights. An existing deck—previously accessible only by climbing through a window—was fully restored, and now has its own door and new period-appropriate slatted deck rails with spade-shaped cutouts. “During the Craftsman era, motifs for cutouts in railing slats were often hearts, spades, or diamonds,” explains Tim.

Because Mary and Andy like to leave their bedroom door closed to keep their cats out, Tim designed a transom above the room’s door to facilitate airflow—a nice period feature that works wonders in the space, as do the pocket doors used on the closet and the bathroom.

The bathroom itself combines the best of old and new with a claw-foot tub, inset medicine cabinet, and radiant floors beneath hexagonal tiles that are interspersed with a flower pattern—a design the couple likes so much, they plan to use it in their downstairs bath as well. Mary is tickled with the end result. “In the morning, the bedroom is like a sun machine—I love it!”

Mary is much less enthusiastic when describing the kitchen she and Andy inherited with the house, which was tiny, and had been awkwardly chopped up thanks to an earlier conversion of a service stairway into a powder room. “The kitchen was almost too horrible to describe,” she says. “We could basically fit one person in there to cook, and in order to open the spice drawer, you had to first open the door to the stove!”
Tim suggested adding a 114-square-foot bump-out to provide enough space for a decent-sized kitchen.

Mary and Andy swallowed any hesitations they felt about the scope of the project, and soon the ideas began to flow. Mary had always wanted a breakfast nook that incorporated storage; Andy wanted that storage to accommodate his stereo’s subwoofer. The couple had long been coveting a 1950s Wedgewood stove, so Tim suggested they make it the centerpiece of the new design. It’s accented by countertops made of compressed recycled paper, beadboard walls, a farmhouse sink, and a collection of vintage lighting fixtures Mary and Andy spent years gathering.

“Lighting is absolutely critical,” says Andy. “It’s probably one of the most important things to creating an atmosphere or a mood, and we wanted to get it right.”

It turns out that after all those years of struggling with decisions, the couple proved pretty good at making the right ones for their house. “I found Mary and Andy willing to do whatever it took to understand their options; assess materials, finishes, and fixtures; and make informed decisions,” says Tim.

“I don’t think we would have nearly the house we do without Tim’s assistance.” says Andy. “But now we come home after a long day and say, ‘This is pretty nice—we’re really lucky to live here.’”

An Old-House Tour of Strasburg, Virginia

A French Creole Home in Louisiana

Art Nouveau Charm in a Bungalow