When Montana Scheff and Ryan Knoke bought their 1905 Colonial Revival on Minneapolis’ historic Park Avenue, they were pleased to find that most of the 2,500-square-foot house was intact and restorable. (See here for more on their woodwork restoration.)

The kitchen, however, was a notable exception. “It was the worst part of the house—the one room where we looked at each other and said, ‘I’m not sure how to put this back together!’” Montana remembers.

The kitchen had been drastically altered in the 1970s in some odd ways. A harvest gold stove and refrigerator so tightly hemmed in the door leading to the back porch that it opened only part way. “You nearly had to turn sideways to get through it,” says Ryan. Furthermore, there was a general lack of light and air. “If you burned toast in here, the smell lasted for a week!” says Montana. No wonder—the ’70s remodel included just one window, an inoperable center pane with glass block on either side. Dark-stained pressed-wood cabinets seemed to absorb what little natural light filtered in.

The drop ceiling stepped down once and then leveled off again as it approached the outside wall, making a wide section of the ceiling actually vertical. As a result, the workspace around the sink felt like a tunnel. The top half of the walls was covered with busy orange and yellow floral-print wallpaper, and the bottom half was finished in beige plastic tile. The nouveau-scullery look was completed with dark brown low-pile carpeting—except on the servants’ stairs, which were covered in pea green shag.

Photo Gallery: Before & After 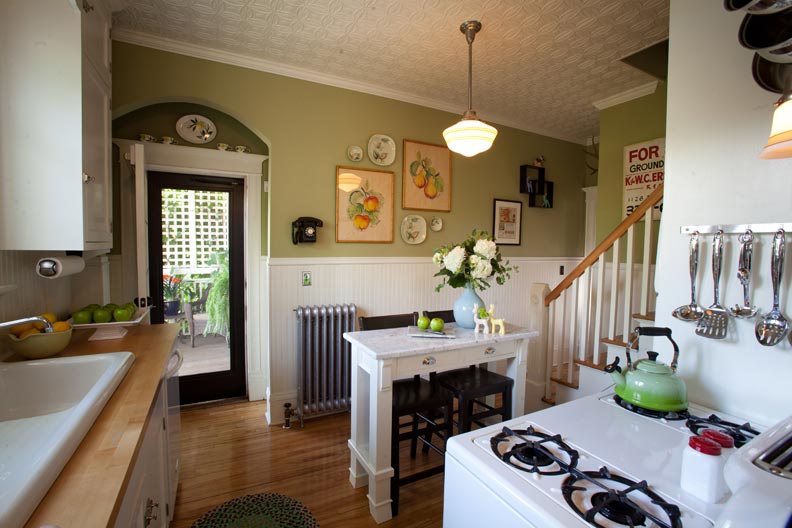 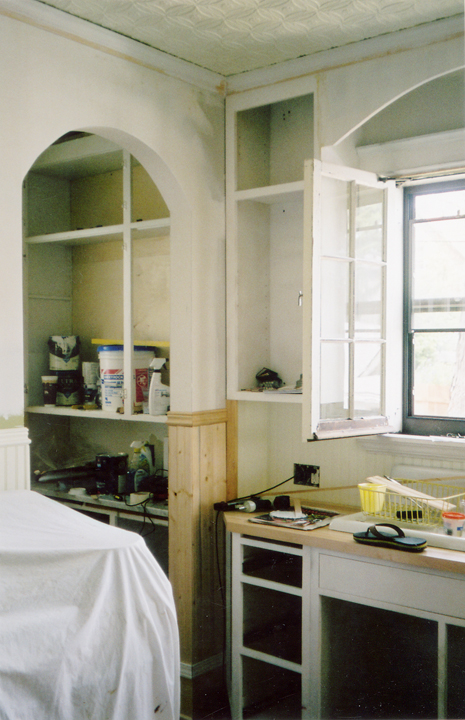 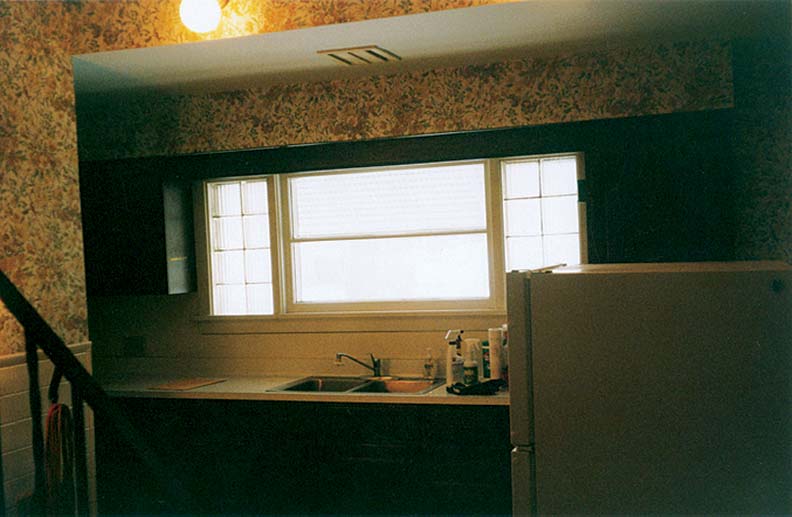 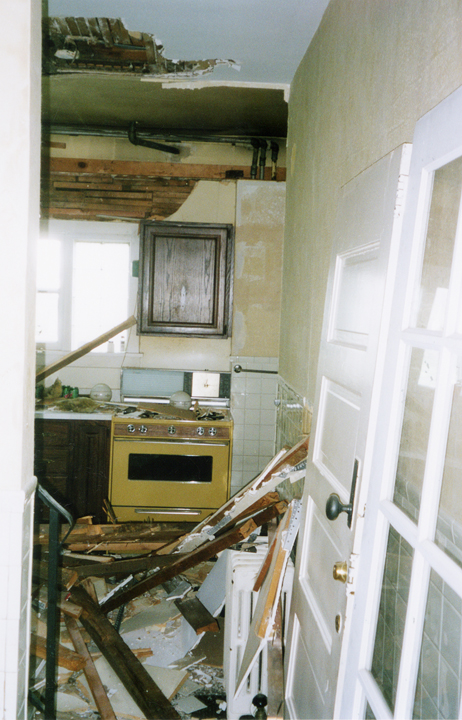 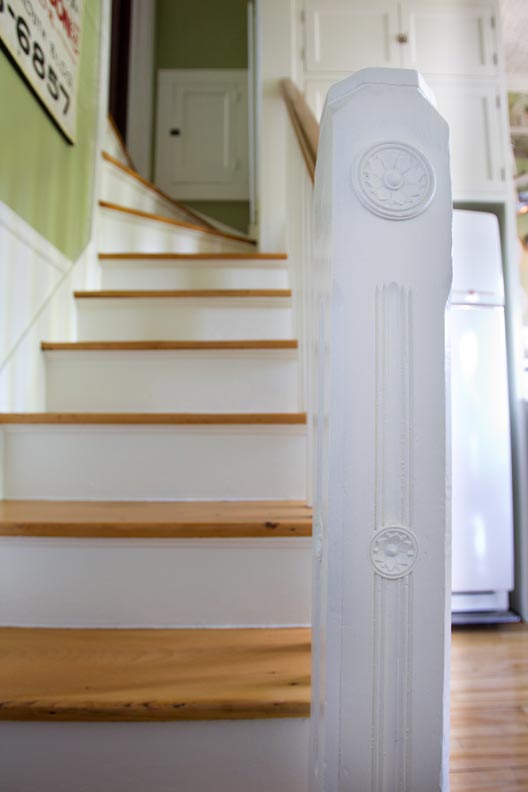 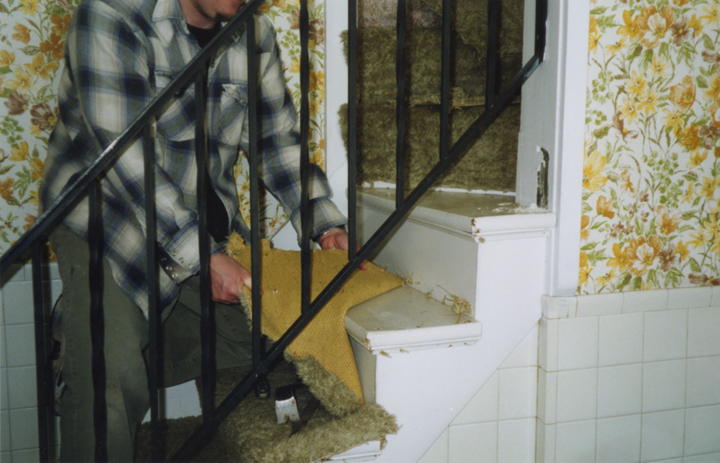 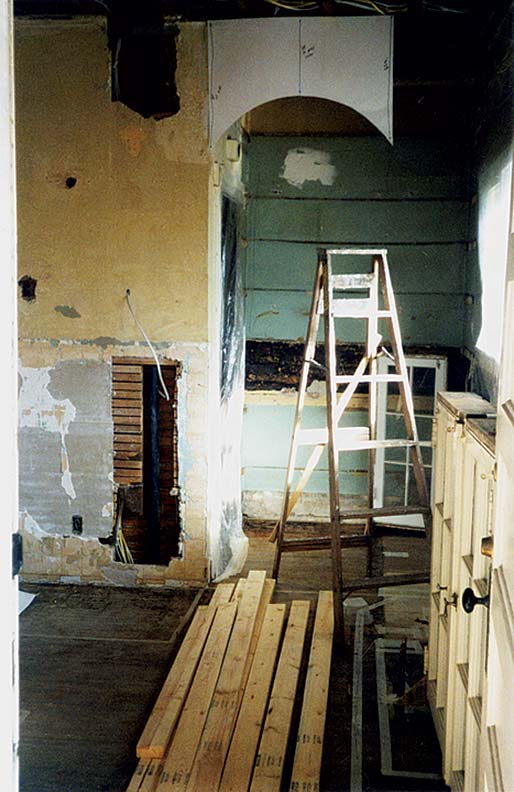 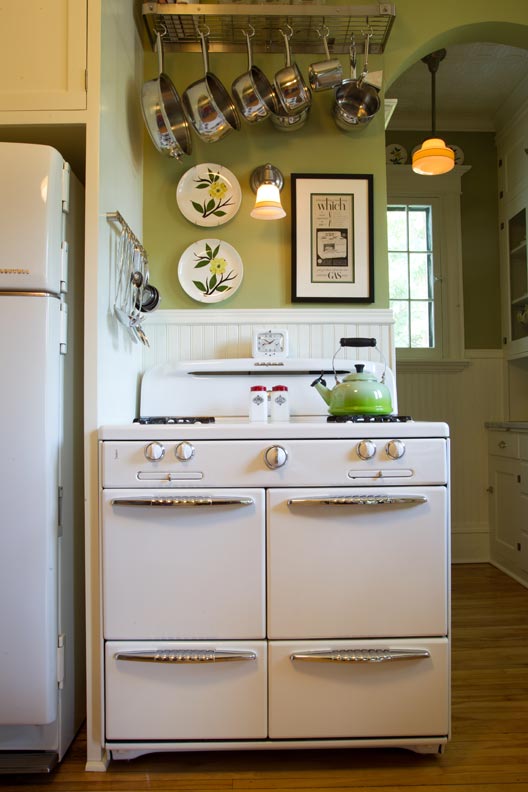 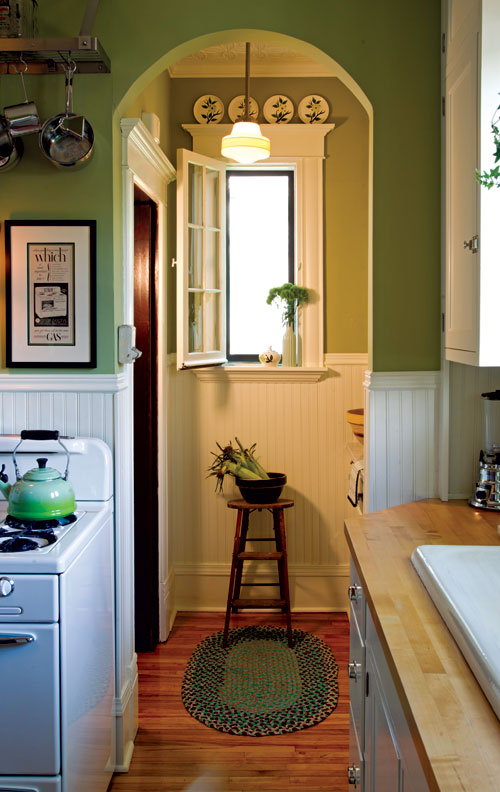 Ryan and Montana weren’t sure where to start undoing the ’70s-era damage, so they took a step back and established three general principles. First, the kitchen would remain relatively small. “Several people said we should enlarge the room by knocking out the maid’s stairs,” Ryan says, “but that simply wasn’t an option. We love the open staircase. In fact, it was the only thing we actually liked about the kitchen!” A second given was that the kitchen would have a historical look to complement the house’s turn-of-the-century style—but with at least a few modern conveniences, like a dishwasher and a garbage disposal.

Finally, Ryan and Montana would use salvaged materials wherever possible to create the illusion that the new kitchen had always been there. “We love old houses and their original architectural details,” Ryan says, “and that extends to every room, including the kitchen. So using authentic components wherever possible just seemed natural to us.”

“Since vintage cabinets, sinks, windows, and moldings are available through salvage yards, and are usually better quality than the modern remakes,” adds Montana, “why not use them? It just made sense.”

Some clues about the room’s original layout were revealed when Ryan and Montana dismantled the kitchen. When they tore out the carpeting, they found the ghost of a doorframe between the main part of the kitchen and the passageway to the dining room. Removing the drop ceiling revealed shelves near the ceiling in the passageway. And when they took out the tile and wallpaper, they found ghosts of additional shelves and a counter. “That was a revelation!” says Montana. “We realized there had been a butler’s pantry in the passageway.”

They decided to reincarnate the doorway (minus the door, to give the kitchen a more open feel) and the butler’s pantry. A visit to the ReUse Center, a Minneapolis nonprofit that recycles building components, miraculously turned up a period pantry cabinet that precisely fit their space and met their aesthetic standards. “The pantry is built like a tank,” says Montana, “but installing it was actually quite easy. We just slipped it into the new space we had framed and screwed it onto the studs. It had no countertop, so we had one made out of Carrara marble. Not only is it a timeless look, but it’s also great for rolling out dough.”

The pantry doors came with traditional recessed wood panels, but Ryan and Montana preferred doors with glass inserts for the upper cabinets. “I cut out the wood panels with a jigsaw,” says Montana, “then I bought some old windows with wavy glass from the ReUse Center. I removed the glass and took it to the hardware store to have it cut to fit the cupboard doors.” He routed out a recess for the glass inside the panels, then attached the glass with clear silicone glue. The result is totally convincing—the pantry appears to be original to the house.

When they hired a craftsman to build new cupboards for the rest of the kitchen, they let the pantry dictate the styling: flush-closing frame-and-panel cabinet doors with flat panels (wood rather than glass) and drawer fronts that overlay the face frames. To further unify the look of the old and new cupboards, they installed reproduction period-style cabinet hardware throughout.

To banish the kitchen’s darkness, they found a six-light casement window to go into the butler’s pantry and a pair of matching casements to replace the inoperable window over the sink. All three, found at an architectural salvage company, came from the same house. To bring in even more natural light, they found a French door for the exit to the back porch. The door and most of the window casings are also salvage; Montana made the window headers, windowsills, and crown moldings.

Another found object greatly determined the kitchen’s layout and character: The previous owner had left a 1948 Roper range in the basement. “It was still connected down there and in working order,” says Ryan. He and Montana loved the Roper’s Streamline Moderne styling, and they found that it was in excellent condition. “All we had to do was clean it,” says Ryan.

To go with the Roper, they found a 1954 General Electric refrigerator-freezer for $12 at an estate sale. “It works perfectly, and the interior is in fantastic shape,” says Ryan. “We did have it resurfaced, but it was less than $100. Some of its coolest features are the revolving shelves and the foot pedal that you push to open the door when your hands are full of groceries.” Realizing that the fridge might need to be replaced at some point or that they might sell the house some day, they had their cabinetmaker construct a niche for it that will also fit a modern-sized refrigerator.

They later found original magazine ads for both appliances; the ads are displayed on the kitchen walls, along with an old hand-painted sign from the previous owner’s real estate business that they found in the garage. The kitchen sink, which sits in a new maple butcher-block counter, is another item found at the ReUse Center. “We looked all over town again and again for just the right old sink,” says Montana. “But everything we found was too tall to fit under the windows. This one has a low enough backsplash, and it also has a modern-size drain opening that fits a disposal unit.”

One of the kitchen’s most beautiful components is the small island. “At first, we had an antique baker’s table here,” says Ryan, “with two flour bins below and drawers above. It was charming, but because of the flour bins, you couldn’t sit at it—so there was no place to eat in the kitchen.” They looked for something to replace it, but couldn’t find anything that was the right fit for the narrow space. Finally, Montana designed a unique piece of furniture that has thick legs and flared feet; it was built by their neighbor, Gary Anderson, a third-generation cabinetmaker. They ordered a marble top to match the counter in the butler’s pantry. “On weekends we sit here and have a nice leisurely breakfast,” says Ryan. “This little piece really changed the feel and usability of the kitchen for us.”

Ryan and Montana decided on beadboard wainscoting for the walls after finding a ghost of a molding underneath the plastic tile. A chunk of plaster that fell off the wall during deconstruction showed that the kitchen had originally been painted a light green; the upper parts of the walls are finished in paint that was color-matched to that shard. The room’s crowning touch is its tin ceiling. “We looked at reproduction tin ceilings,” says Ryan, “and they just looked too new, too perfect. That’s not what we wanted.” So they bought an old tin ceiling that had been salvaged from a St. Paul warehouse. To retain its antique look, they decided not to strip it. Instead, they just scraped off the loose, flaky paint, thoroughly cleaned it—first with a wire brush and then denatured alcohol—and repainted it.

The result of several years of hard work—and dedication to some basic principles—is a kitchen made of many parts from many sources that, at first sight, give the illusion that they’ve always been together. It’s old and new and delightfully comfortable and functional throughout.