Enter the posh Art Deco town house on Chicago’s Astor Street, and you get the sudden urge to straighten your cummerbund and check your cufflinks and tuxedo scarf—for all the world, you’d swear it was the 1930s and Jean Harlow just might sweep past in a silvery silk robe. Go up two floors, and you’re greeted by a towering 16′ rotunda with an elaborate domed skylight and a ritzy marble floor. You’d almost expect to hear a Louis Armstrong 78 playing on the console.

The town house looks as stunning now as it did when it arrived 80 years ago on this tony-but-traditional block of late 19th- and early 20th-century dwellings. Credit goes to Gregory and Randa Dumanian, who bought the home 12 years ago, after it had been diced up into smaller apartments. Chunks were threatening to fall from the building’s French limestone façade, and the 18-ton, three-story cast iron bay window was slowly peeling away from the building. But the couple was undeterred.

“I stood in the dining room and fell in love,” Randa says. Greg’s initial response came in Armenian: “Balasch dan, chem arner”—“If they gave it for free, I wouldn’t take it.” But the Dumanians looked past the unsympathetic interior alterations to see what the residence once was, and decided they were willing to put in the work to make it a masterpiece once more. 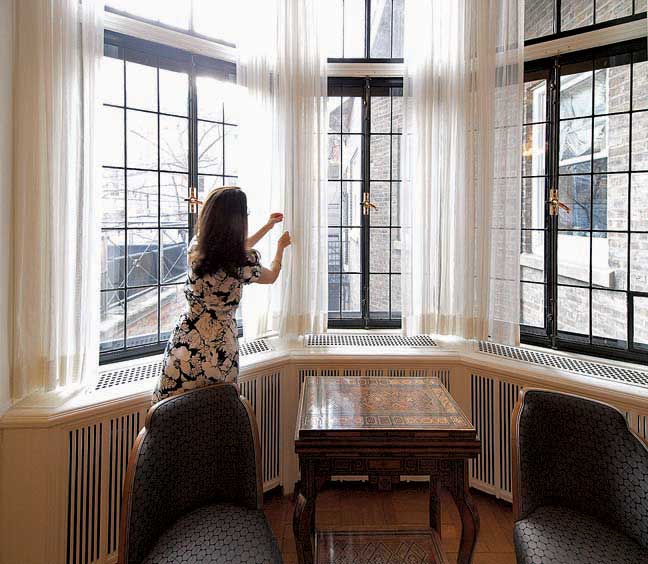 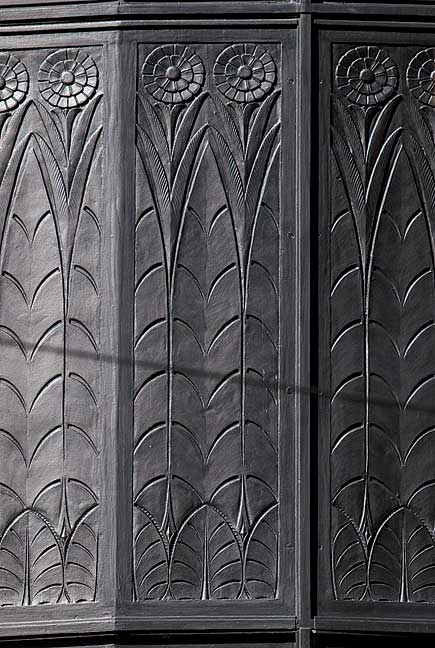 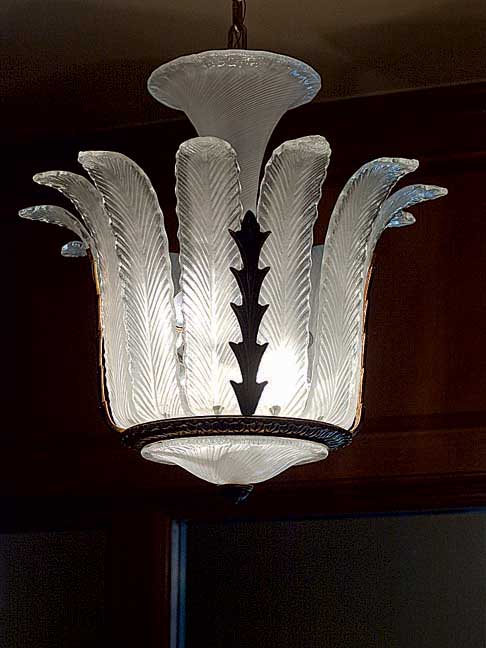 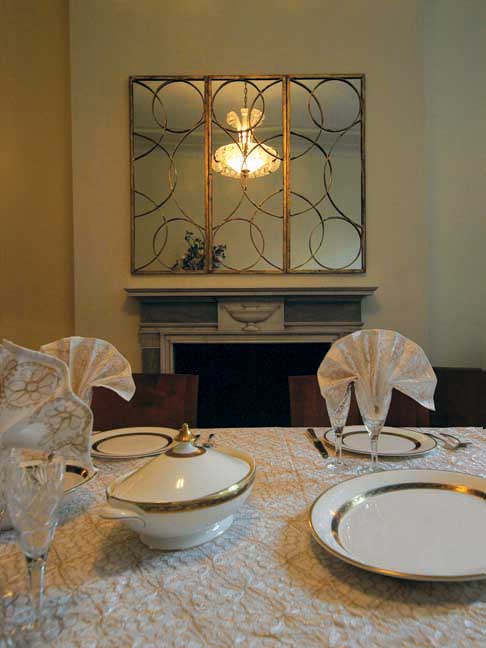 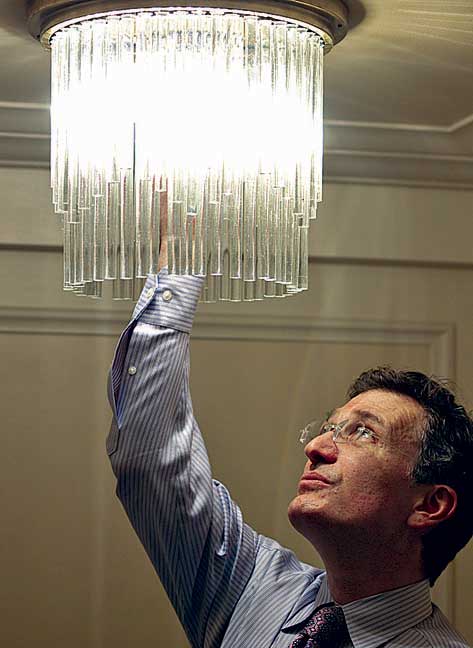 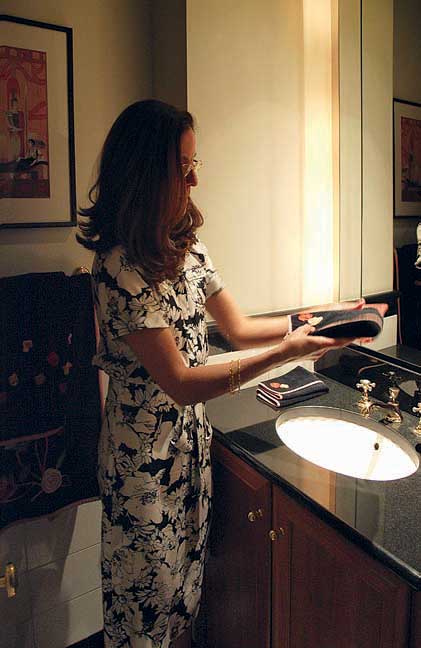 Real estate banker Edward P. Russell built the home for his family in 1929. It was designed by Holabird & Root, an architecture firm most noted for creating many of the skyscrapers in the still-young city of Chicago. A residential commission this small would have been unusual for the firm, but Russell was the banker to utility mogul Samuel Insull, one of the company’s biggest clients. And the construction budget of $195,000, according to the Chicago Tribune, was no small sum. Adjusted for inflation, it would be the equivalent of $2.4 million today.

Holabird & Root took the commission seriously, and gave the slender town house the proportion, verticality, and amenities of a skyscraper, like the nicely lit entry lobby with wood paneling, terrazzo flooring, a cage elevator, and a sweeping staircase. The town house even functions structurally like a skyscraper, with wide, column-free interiors.

The home caused a sensation when it was completed. The Tribune ran a photo of the house in December 1929 hailing it as a “20th-century residence” for its “simple lines and restraint in the employment of ornamentation.”

Restoration contractor Roger Keys, who oversaw nearly two years of improvements to the home, believes Holabird & Root used the house to test new methods of skyscraper design and concrete pouring techniques that they would later employ in taller buildings. “It’s an amazingly well-built house,” he observes.

Russell kept the house for nearly a decade. He sold it in 1938 for $65,000, according to the Tribune. Although it put on a good face to Astor Street, behind the limestone façade, the home would spend the next 60 years in a slow decline.

Turning Back the Clock

The Dumanians found a listing for the home in 1998. “The agent said, ‘It’s in very sad shape and doesn’t show well,’” Randa recalls. “It looked like a war zone. Asbestos tile, plywood everywhere, shaggy green carpeting.” Yet, she was in love with the house. “That was the first mistake,” she says, smiling. “You don’t fall in love with real estate.”

But it was a courtship destined for marriage. Greg remembers the house as a kid growing up in the neighborhood. He would later collect Art Deco furniture—he still has a few pieces—as a young medical resident in Boston in the 1980s, fueled by a fondness for Fred Astaire movies as a child.

Among the first tasks on the Dumanians’ list was restoring the spaces to their original dimensions by tearing out the partition walls that subdivided the rooms into smaller apartments. “It was partitioned off in a very weird way,” says Chicago architect John Kelly, whom the Dumanians hired to oversee the house’s first rounds of restoration. “It was like a commune.”

Pulling down the walls restored a view from the dining room through the rotunda and into the living room, where the big bay window beautifies and illuminates the space. The sightline had been obscured for decades. “I remember the day they pulled down the wall and you could see that axis,” Randa says. “We went to Gibson’s to celebrate.”

John’s task was to create a living space for the Dumanians on the first and second floors of the building. (The third floor would be a condominium unit under separate ownership; the Dumanians also own the fourth floor and penthouse.) The biggest challenge in doing this involved designing an internal staircase that would lead down from the rotunda to link the Dumanians’ second-floor living space with bedrooms on the first floor. Engineers were concerned that cutting into the concrete floors to install the pinwheel-like marble stair would weaken the structure. They also were worried the floor’s thickness might not allow for enough clearance for the stairs to be traversed without some serious ducking. But without the stair, the Dumanians would have had to pass through the building’s common spaces to fully access their home.

It took workers a week to cut through the building’s concrete bones to make room for the new stair, as the Dumanians and their architect nervously awaited the outcome. “I was concerned it would look like a thing we added,” John says.

Fortunately, the building was able to structurally and physically accommodate the stair. The geometric Art Deco railing, designed by John, picks up details from the home’s original grillework. The marble stair curls downward from the edge of the rotunda as if it had been there all along. “The railing is one of the main things that ties it in to the rest of the house,” John observes.

Nailing down the home’s details was a task within itself, Randa says. “This is not an American Art Deco. It’s not Miami chrome and vinyl—this is very European, which makes it challenging.” The couple was actively involved in the improvements. Randa got blueprints and other information on the home from the Chicago History Museum, and before the building was habitable, she would visit the job site and monitor the construction work.

“I’d show up and order these men around,” says Randa, who has a background in structural engineering. When she noticed the concrete interior stairs were poured incorrectly, she dug out the cement before it hardened—using a plastic spoon, the only implement she could find.

Then there were original ceiling lights, composed of 70 to 80 decorative glass rods, each of which needed to be reseated into its own plaster holder on the fixture. After getting a quote of $15 per rod, Greg decided to fix the lights himself. “I’m a hand surgeon,” he says. “I know how to sling plaster.”

The Dumanians also took on the challenging task of repairing the home’s stone façade, but had some trouble finding a contractor with the expertise—and the fortitude—to properly tackle the job. Then they met Roger Keys, owner of RW Keys Decorating, who had seen his fair share of restoration work during his 35-year career.

The team, led by Roger and his son Matt, examined the stonework, and found spalling and patches from previous repairs. Water had gotten behind some of the stone and caused the anchors to rust. Some new stone would be needed, but the near-white limestone was unlike any Roger had seen in the Midwest. Randa’s research turned up the reason: The stone was from a quarry in Lens, a mining town in southern France.

It took seven months get the stone—three of which were spent just getting the quarry to return Roger’s phone calls.Fortunately, a local stonemason had a connection to the quarry, and the order for 100 square feet of 4″-thick stone was finally placed. Armed with the new stone, Roger replaced decayed stones and made Dutchman repairs on the façade. The patch work included repairing decades-old fixes that were done with visually incompatible—but easier to obtain—Bedford limestone. New mortar was painstakingly matched and colored to replicate existing mortar.

The next task was even more daunting: repairing the beautiful but failing three-story bay window. The bay was simultaneously slipping downward and leaning forward away from the home’s façade, allowing water and wind to get in behind the window’s housing and cause decay. Workers discovered a half-inch of corroded steel flakes from the window hiding behind the walls.

The window’s structural problems weren’t solely caused by age and weather. The team discovered that the window was anchored securely on the upper floors but far less so at the base, causing the steel anchors to weaken under the window’s tonnage. Roger oversaw the creation of a new system of stainless steel connections and structural piping, hidden behind the home’s walls, upon which the window would be anchored.

Roger and architectural preservationist Marty Hackl rebuilt the deteriorated leaded glass caming in the casement windows. Leaded glass and screws were painstakingly removed from each window, numbered, catalogued, and put back. Roger tracked down a suburban company with old-fashioned metal-making equipment to remake exact replicas of the windows’ hinges and openers. Then they chemically stripped the bay’s metal exterior, removing decades of paint, scaling, and weathering, revealing a beautiful lead-coated cast iron detailing of palms, ferns, and plants. Once the entire bay was restored, the team used a pair of old-fashioned 20-ton screw jacks to lift it slowly into place. To prevent damage (“If you do it too quickly, you could crack the cast iron,” Roger says), they spent two weeks moving the window just 1½” upward, while pulling it inward 5/8″.

With the window in place, work returned to the rotunda, where Roger rebuilt the space’s signature skylight. The design of the skylight’s glass—abstract lines laid randomly like pick-up sticks—was original to the building, but the blueprints showed an entirely different design, one with a heavier Art Deco sunburst motif that the Dumanians preferred.

When the weather is nice, sunlight pours in through the new UV-resistant glass skylight and illuminates the rotunda. At night, an array of LEDs (replacements for a bulky, glitchy bulb system) allows the skylight to function like a modern light fixture. “It looks like it’s from the ’30s, but it would have been impossible to make this in the ’30s,” Matt says.

The Dumanians, who have a teenage son and daughter, say they are happy with their home, which Randa refers to as her third child. The couple will often surprise architectural tour docents by inviting the groups in right off the street to have a look inside, to witness first-hand how the Dumanians have seamlessly blended Jazz Age style with contemporary living.

An Old-House Tour of Strasburg, Virginia

Adding On to a Tudor