It was the middle of a harsh winter when Stella and Michael Somers first glimpsed Rock Hall, a sprawling 1912 Mediterranean Revival mansion in Colebrook, Connecticut. The home’s architect, Addison Mizner, was famous for similarly styled oceanfront mansions in Palm Beach, Florida. The New York couple, looking for a place they could call home with their young daughter, was instantly enamored with the house, despite its somewhat alarming condition after having spent 30 years as a summer getaway for a group of friends.

“It was in interesting shape,” Stella recalls. “Everything was frozen—we wouldn’t know the full extent of the damage to the plumbing until the spring thaw.” Yet the home’s grand spaces, original chestnut woodwork, and unique appearance drew the couple in. “It was a true mansion in every sense of the word,” says Michael. “The design, materials, and scale were in place to make it a handsome and, above all, comfortable home.”

While the house had scorched wiring, broken pipes, and no insulation, it boasted a storied pedigree. Jerome Alexandre, heir to the Alexandre Steam Ship Line, commissioned Mizner to design the house in 1911. The architect used many rare local woods in the construction of the 10,000-square-foot house, and he also installed a cast concrete fireplace in the great room—a very early example of the technique. 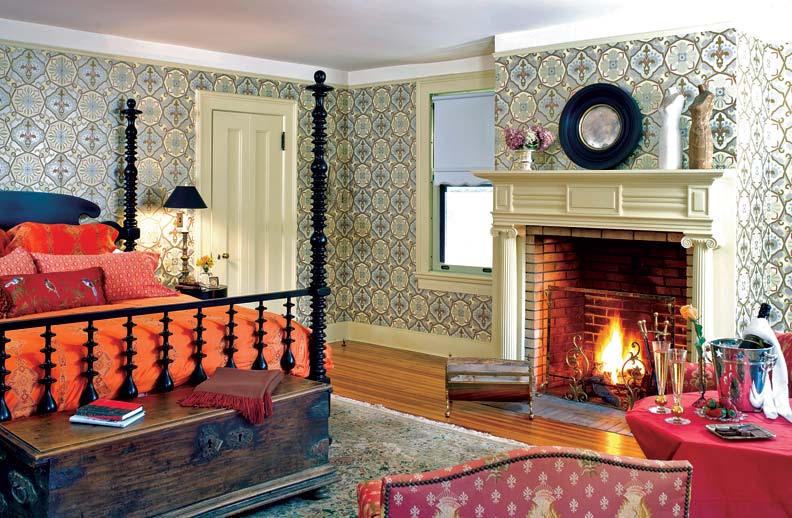 Stella, an interior designer, and Michael, a bond trader, had restored properties before, but never one on this scale. Their first challenge was finding the right contractor to help carry out their vision, which proved harder than they anticipated. “One person I had high hopes for wanted to paint all of the woodwork in the great room white to brighten up the space!” Stella laments. “I said ‘No, thank you.’”

Several others wanted to replace the original windows, which Stella also knew would be a mistake. So when restoration contractor Creighton Brown of Argos Restoration in Housatonic, Massachusetts, walked through the house touching the windows appreciatively, Stella knew he was the right person for the job. “I said, ‘He gets it; he loves the windows!’” she exclaims. “I knew he would be able to restore the house to its original intent.”

“The leaded windows in the main hall were in really bad condition,” says Creighton, who has been restoring buildings for more than 40 years. He was able to find a nearby craftsperson, Bill Dodds, to re-lead them. “Shipping the windows to one of the main restoration houses would have been too costly,” Creighton says.

Many of the other windows in the house—casements in the main rooms and double-hungs in the living quarters—also needed work. Creighton disassembled and stripped them, creating and patching in new parts where wood had rotted, and replacing all of the weatherstripping. He was able to save almost all of the original windows.

Another time-consuming task was integrating a new heating system into a house that had never been used for year-round living. (Both the plumbing and electrical systems also were completely redone.) With the help of a colleague, Creighton devised a diversified system that replaced the old steam radiators with hot-water versions, and used 4″ ducts that he snaked through the rafters and floor joists to deliver high-velocity forced air. “Getting a heating system in without destroying the house was a real challenge,” he says.

The kitchen still had many original features, including a walk-in icebox that had been converted to refrigeration in the 1940s. Stella fell in love with it at first sight. “The caretaker told us the last few people to look at the house were wondering how they could rip it out and put in a SubZero refrigerator,” she explains. “I said, ‘You’re kidding…a walk-in refrigerator trumps a SubZero any day!’”

At some point, metal cabinets had been added to the kitchen; Creighton replaced them with open shelves supported by decorative brackets, a detail borrowed from the butler’s pantry. The Somers also installed wooden countertops, ignoring several friends’ recommendations to go with granite. “That just didn’t fit,” says Stella. “The house was crying for something else.”

Upstairs in the master bathroom, Stella elected to rework the floor plan to give the space a better flow. It proved to be a fortuitous decision: When Creighton’s team moved the original ribcage shower and the 7′-tall slabs of 1½”-thick marble encasing it, they discovered that it had been leaking for decades and had completely rotted the floor joists beneath. “If we hadn’t changed the floor plan, the tub would have fallen through to the great room,” says Stella.

The ribcage needed restoring as well—plumbers William Perotti & Sons cleaned out the interior lime buildup, sealed leaking joints, and retrofitted a pressure-balancing system. Stella also added a modern-day mixer as a safety precaution for her daughter.

One of the home’s most unusual features is its wine cellar—a room that was originally used to store Alexandre’s silver and wine during the months he lived elsewhere. The space is secured by a floor-to-ceiling bank vault door. “The door was totally rusted and inoperable,” Creighton says. “Duncan Miller, a jeweler and also a tinkerer, rebuilt the lock, then picked it to get the combination.”

Once the structural work was complete, Stella concentrated on the décor. Researching wallpapers alone took her hundreds of hours. “I wanted an Arts & Crafts and Aesthetic Movement feeling, but I didn’t want it to look like grandma’s house,” she says. “I also wanted a union, rather than a disconnect, with the grounds and the home’s architecture.”

Her choices pay homage to the multitude of lilies, dragonflies, and other flora and fauna on the property. The kitchen wallpaper, for example, boasts dragonflies and spiderwebs and has a hint of metallic sheen that glows at sunset.

“One of the real pleasures of the job was that Stella was the decorator,” Creighton says. “I’m usually leery of that, but she did a wonderful job and I really learned a lot from her.”

Stella also managed to track down former scenic artist Alyson Posella, who found a way to repair the original canvas ceilings in the bedrooms, library, and dining room. “We were able to go to the grandson of the person who installed the canvas ceiling for some instructions,” says Stella. Alyson’s specialized technique involved finely detailed patching, scrubbing the old Dutch calcimine away (causing the canvas to drop away from the ceiling when wet, then shrink back up as it dried), and recoating it with Super Spec oil paint.

The ceiling artisan was one of many serendipitous connections Stella made through Rock Hall. In the 1960s, when the house had been abandoned for several years, it endured squatters and kids who came to party on the grounds. One of those kids showed up one day, with pictures of the house from that time. “As a kid of 17 or 18, she always felt an affinity for the house and would pick up the garbage people left here. She told me she felt the house was crying during that time,” Stella says. That woman grew up to be a restoration professional; she doesn’t think the house is crying any more. Her old pictures were invaluable in guiding repairs, and Stella remains in touch with her.

Soon after the Somers finished their 18-month restoration project, the economic downturn on Wall Street impacted Michael’s job. “He began trading for himself and working day and night; it was a very difficult time,” says Stella. To try to take some of the pressure off, Stella suggested turning their home into boutique lodging. “People who heard about the house wanted to see it, so it seemed like a good fit,” she says. She’s found that she enjoys sharing her home with others and has even forged friendships with several of her visitors.

Michael is appreciative of Stella’s hard work throughout the house—“My wife made remarkably thoughtful decisions when it came to the work”—and adores the finished product. “When the sun is shining and the house and grounds are sparkling, there is literally no better place on earth.”

Online exclusive: Check out our guide to other famous Addison Mizner buildings.